The Census is now live.

Plain and simple, the 2020 Census is a count of every individual living in the country of the United States of America. This year’s census will be the 24th since the nation’s founding.

When responding to the 2020 Census, college students should be counted where they live and sleep the majority of the year. For most students, that means in their college town, not back home with their parents or guardians.

However, students who have moved home within the last couple of weeks need to complete the Census based on the address where they lived for the past six months or more.

Parents or guardians should only include children in college who live with them full-time during the school year.

The census provides critical data that lawmakers, business owners, teachers and many others use to provide daily services, products and support for you and your community. Every year, billions of dollars in federal funding go to hospitals, fire departments, schools, roads and other resources based on census data.

The results of the census also determine the number of seats each state will have in the U.S. House of Representatives, and they are used to draw congressional and state legislative districts. 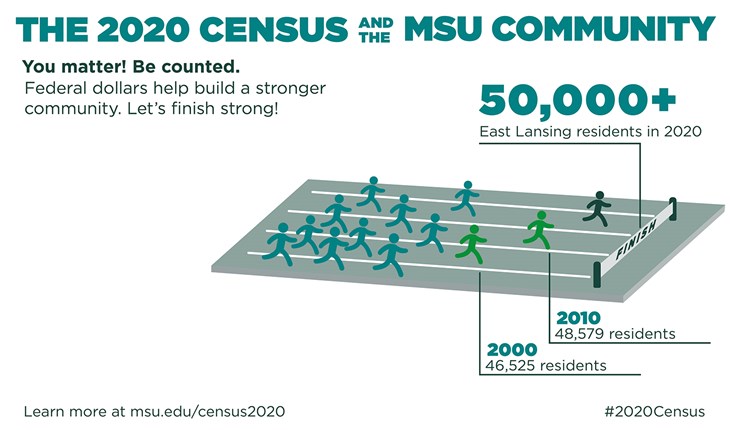 To learn more about Census 2020 efforts at MSU listen to this podcast featuring Sue Webster. Sue is a community liaison in Michigan State University's Offices of Government Relations and Student Affairs and Services.

What do ON-CAMPUS students need to do?

What do OFF-CAMPUS students need to do?

If you have moved home within the last couple of weeks, please complete the Census based on the address where you lived for the past six months or more.

What do students WHO LIVE AT HOME need to do?

What do INTERNATIONAL and UNDOCUMENTED students need to do?